What you need to consider when choosing a car stereo.

When you hear about a car stereo, the first thing that comes into your mind a receiver. The choice of a good receiver is dependent on the audio features as well as expandability of your car audio system. When you are looking out for a good audio system, it’s important to consider some factors;

Before settling on which car stereo system to use, it’s important that you evaluate the audio sources you always play with. You should assess whether you need a CD player, if you will use a DVD playback when parked or you have ditched discs instead of digital media. The choice you settle for will depend on whether you will go for a large A/V receiver or a traditional CD-receiver. For those who keep a CD book on their car, it’s equally important to have a receiver that has a USB, MP3 or WMA playback. This is because you may want to plug a phone or media player at some point.

With the advancements in technology, it’s now much easier to have your smartphone in the pocket and play music on your stereo. While other smartphones such as iPhones use a badge to locate media device others such as Windows phone, Android and Blackberry picks up a receiver that uses A2DP stereo Bluetooth audio streaming for wireless media playback. If you are using heavy streaming apps such as Pandora or iHeat Radio, then it will force you to identify receivers that have controls for such applications.

Every car audio receiver developed today features an Am and FM radio that tunes on to the local stations, but this can also change. Some receivers come with an in-built HD radio decoding that will improve your audio quality through broadcast in digital quality. Aside from that, you’ll get access to subprograms for stations that support multicast that increases the amount of free programming. For the few new car stereos that can support satellite radio, they do so using an optional SXV200 Sirius XM or SXV100 connection module. If you opt for this option, then you might be required to purchase additional equipment as well as pay an annual subscription fee.

There is more to a GPS system than just playing your music. Car stereos are now integrated with GPS navigation system that will help you get where you are going. You can also get all your traffic reporting through the RDS-TMC band or the HD Radio tuner.

Aside from the audio sources, the central idea behind the receiver is the correlation between the internal amplifier and car speakers. The amplifiers power can be measured in two ways which include; RMS and peak power. Peak power is measured in watts and is usually the maximum amount of power that the amplifier is capable of producing.

Distinguish between the physical dimensions and physical controls.

When choosing the type of receiver it’s important to determine the physical dimensions and interface of the receiver. This would mean deciding on whether you would go for a Single-DIN or a double-DIN-receiver. Single-DIN occupies less space in the dashboard, are less apparent to outside viewers. The double-DIN, on the other hand, is often large and would take up most of space in the dashboard. It also features a touch sensitive display. If you are the kind of person that is into app mirroring, GPS navigation and DVD Playback then you will definably want to have this stereo with you.

Jvc car stereos have earned their place in the car[...] 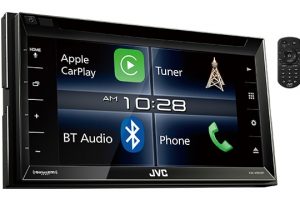 Getting to understand your car stereo better

Your email is safe with us.

We're currently offline. Send us an email and we'll get back to you, asap.

Type and press Enter to search